Introducing the first blood test to predict the aggressiveness of prostate cancer.

September is Prostate Cancer Awareness Month. We spoke with Drs. George Yousef and Michael Ordon about Prostate Predictors, their new blood test for cancer that won the Biological Innovation Prize at Angels Den 2018.

Prostate cancer is the most common cancer among Canadian men, and the third most lethal.

Estimates are one in seven Canadian men will contract prostate cancer in their lifetime—that’s almost the population of Toronto.

Of the 21,000 men who will be diagnosed this year alone, half will be classified as having low-risk cancer, meaning their cancer is slow-growing, with no imminent threat to life. The other half are having high-risk, meaning their cancer is aggressive. Men in each group will undergo treatment protocols accordingly. Those with low-risk prostate cancer will generally be placed on active surveillance, and while being monitored, they will endure painful—and not necessarily accurate—biopsies for several years. Those with high-risk will be recommended radical treatment with surgery (prostatectomy) or radiation therapy.

The problem is that there is no reliable test to differentiate between the low-risk and high-risk types of cancers. Physicians are unable to pinpoint with any degree of accuracy whose relatively harmless form of cancer might progress to an aggressive form—and are under-treated. Some men classified as high-risk are over-treated, and with that come needless complications for the patient and spiraling costs to the health-care system.

Enter St. Michael’s Dr. George Yousef, an anatomical pathologist, and Dr. Michael Ordon, a urologist, both affiliated with the Li Ka Shing Knowledge Institute at St. Michael’s Hospital. They want to change how treatment for urological cancers is managed—not just for the prostate, which gets all the attention, but also for the not-so-sexy kidney, where cancer is less common, often more aggressive and harder to detect with current diagnostic tools like imaging and biopsies.

Drs. Yousef and Ordon believe they have the answer: the first blood test to predict the aggressiveness of prostate cancer. Their scientific insight: understanding the biology of the cancer tumour.

Drs. Yousef and Ordon have isolated the unique molecules that control the aggressive behaviour of prostate cancer. Because these molecules are secreted by the tumour into the blood, where they are protected in little bubbles, called exosomes, they make ideal candidates as biomarkers for a blood test. Drs. Yousef and Ordon believe that, once they’re able to validate the biology for prostate cancer, they will have the template to test and predict the behaviour of other urological cancers as well.

Thanks to seed funding from St. Michael’s Hospital donors and another infusion from Angels Den, the reseearchers are now getting set to validate their test, using a much larger sample size with specimens from St. Michael’s biobank and international collaborators in the U.S., China, Germany and Greece.

This philanthropic funding, they say, was essential to get the blood test from idea to validation-ready, mainly because granting agencies tend not to fund projects in the early stage. Such funding can also have a multiplier effect: in the case of Prostate Predictor, it has whet an appetite to push forward with more projects, like a test for kidney cancer.

And if all goes according to plan during the validation stage, Drs. Yousef and Ordon will pursue commercialization potential to make the blood test available more broadly.

Beyond the prize money claimed, Drs. Yousef and Ordon found the experience of participating in Angels Den rewarding. Angels Den is a competitive platform that helps drive medical breakthroughs by St. Michael’s all-star scientists. Candidates first have to go through a rigorous selection process by a committee of scientific peers before they even get to compete in front of judges and the public. What was particularly gratifying to Drs. Yousef and Ordon is that Prostate Predictor underwent both scientific validation and public evaluation—and came out on top.

They aren’t stopping with this test. Their ultimate goal is nothing less than a revolution in care: they want to help usher in a new era in personalized medicine for urological malignancies where patients are active in their own treatment. And because treatment is customized according to the biological behaviour of a tumour, everyone will get the treatment they need—no less, no more.

Now in its fifth year, this competitive platform brings out St. Michael’s Hospital’s all-star scientists who pitch their revolutionary research ideas to nearly 1000 guest and celebrity judges and jurors.

The goal? To win critical funds that will allow their ideas to take flight. And with $500,000 in prizes, made possible by donations, the stakes are high.

Erin Truax is determined to help St. Michael’s stop MS in its tracks

Erin Truax was diagnosed with MS a few years ago. She continues to live life with high energy, and credits St. Michael’s Hospital for its great care. 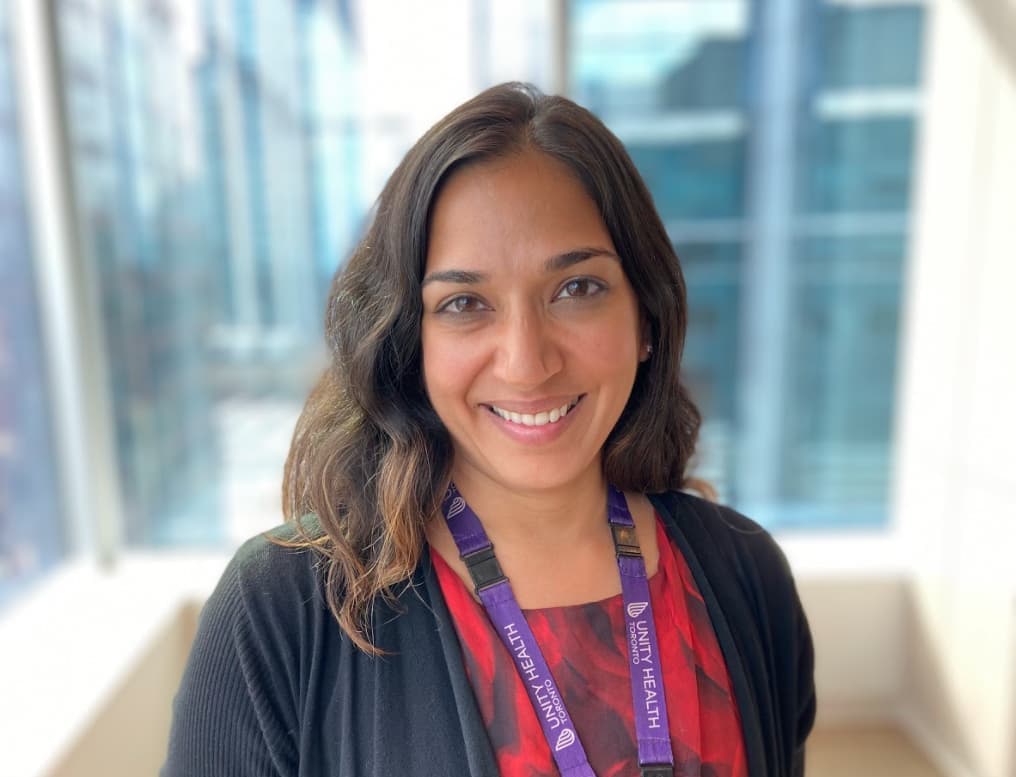 How Dr. Seema Marwaha is using digital technology to understand the patient’s point of view.

The Three Wishes program brought nursing and spiritual care staff together for an ICU wedding that honours end-of-life.

This $1 million gift will help launch a groundbreaking outreach initiative to help seniors reclaim their independence.