Beatriz Ramos Sena de Macedo did not know if she could ever have children.

She had a rare condition that caused her blood to over-clot. She already had experienced two painful miscarriages that needed medical intervention.

To carry a baby to term, Beatriz would need complex, specialized care. Not only did her condition make miscarriages likely, but becoming pregnant could be life-threatening.

Beatriz’s GP referred her to St. Michael’s Hospital, a leader in maternal and fetal medicine, where she met hematologist Dr. Michelle Sholzberg, who specializes in complex cases. After listening to Beatriz’s concerns, Dr. Sholzberg told her to come back as soon as she knew she was pregnant.

Twelve weeks later, Beatriz was back in Dr. Sholzberg’s office. This time, she was anxious. She couldn’t tell if she was pregnant or not. And she was worried that she had already lost the baby.

Dr. Sholzberg referred her to Dr. Howard Berger, a high-risk obstetrician, who ordered an immediate ultrasound. To her delight, Beatriz heard a tiny heartbeat.

Beatriz breathed a huge sigh of relief. Dr. Sholzberg started her on blood thinners straight away.

Dr. Berger and his colleagues at the high-risk obstetrics clinic, who were following Beatriz closely, knew there was a chance her condition would cause the baby to be smaller than average because a placental dysfunction limited oxygen and nutrient flow between mom and baby. The doctors also knew there could be more complications, which is why they conducted regular ultrasounds.

By 19 weeks, the baby had stopped growing. For Beatriz and her husband, Paulo, it came as a shock. But the health-care team was right there.

“It was amazing how the team responded,” Beatriz recounts. “Cathy, the nurse at the high-risk clinic, immediately saw that something was wrong when I left my appointment. She hugged and comforted me. I felt so secure there, even with the bad news. My doctors told me that they would do everything in their power to make it happen.”

The medical team modified the doses of the blood thinners and prescribed an experimental intervention: a cholesterol-lowering medication that had success in improving the health of blood vessels during pregnancy. The treatment worked. Beatriz’s baby, though still small, started to develop again.

But at the 35-week mark, more complications arose. Beatriz developed preeclampsia, which is dangerously high blood pressure that can damage internal organs. The best course of treatment is delivery. Thankfully, the baby was mature enough to deliver safely.

While Beatriz recovered in the ICU, Sophia was being cared for in the nearby NICU. Beatriz recounts how Dr. Sholzberg and the team checked on her several times a day to track her progress and comfort her.

“I was surrounded by love and care that helped me get through,” Beatriz recalls. “I can’t praise the doctors and nurses at the hospital enough. They are like family to me. I am a monthly donor and would do anything to help the hospital. They saved my life.”

The Breakfast of Influencers raised $1.16 million for MAP, a pathbreaking research centre that is using innovative, solutions-focused approaches to intervene at the intersection of health and inequality.

Erin Truax is determined to help St. Michael’s stop MS in its tracks

Erin Truax was diagnosed with MS a few years ago. She continues to live life with high energy, and credits St. Michael’s Hospital for its great care. 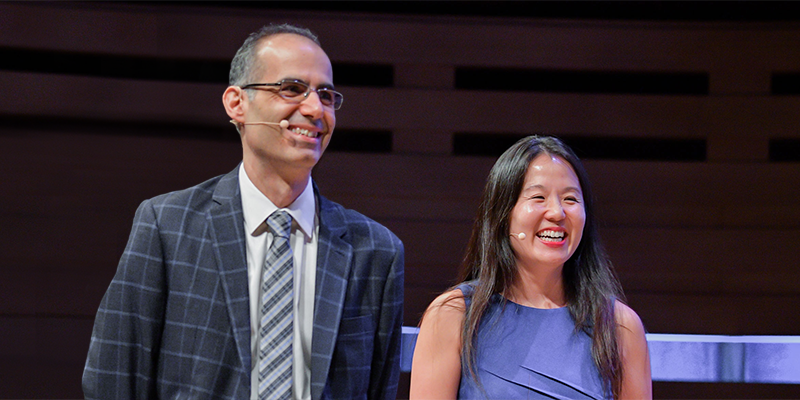